Stay tuned here and be sure to be on the email newsletter list to find out first, where in the world these shows will be performed next. …could be coming to a theatre near you!

We created an amazing theatre for the grand opening and consequent 5 year run of this amazing magic show. 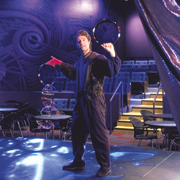 Check out the Steffan Soule magic shop for magic effects and dvds.

View all of admin4's posts.